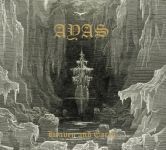 I wasn’t familiar with this old Armenian Heavy Metal act. AYAS used to be active in the mid of the eighties and have released one album in 1988 under the title “Yerkink U Yerkir”. Later, in 1991, they launched a 7 tracks demo and split up some years later. I Hate from Sweden have just released a compilation of this unknown band on 2 CDs. Almost 120 minutes of music, this release compiles 24 tracks. As Armenia was under the iron curtain I guess it was really hard to make Heavy Metal. As I read on an online source, they were one of the pioneers in their really small scene (Armenia was part of the Soviet Union until its demise in 1991). The first 7 tracks from CD 1 belong to their debut album, the other 5 tracks are of their “Dazan Bacht” 1991 demo. The music here has an undeniable tendency to be driven by some spooky doomy keyboards, an element that gives some identity to their music. Everything is sung in their mother tongue, a resource that gave an even more interesting input to their style. As you can guess the production is far from perfect; in fact, it sounds just as a demo tape. Outstanding tracks from this first disc are ‘The Twentieth Century’s Citizen’, the slow ‘The Border Of Centuries’, the 8 minutes long ‘Heaven And Earth’ and ‘Cruel Fate’ (what a good intro!). The second disc contains some rare live and studio stuff back from 1987, 1990 and 1992. The first 5 tracks were recorded at Yerevan Tannery Studio in June 1987. From this recording, 4 tracks appeared on their debut LP (I guess this is a pre-production demo). The other track, titled ‘Hands Off!’, is a bit different from the stuff that appeared on the album; it’s more Heavy Metal oriented with no keyboards and some more aggressive vocals (reminds me of Grzegorz Kupczyk from Poland’s TURBO). The next tracks belongs to a live performance that AYAS gave at Sisian Rock Festival in 1990. The music here is heavier, faster and harder than their previous studio stuff (just try the song ‘Under The Sun Rays’). The next song is a studio composition titled ‘Follow The Trails Of Centuries’. It was recorded in 1990 and it follows the same heavier style that you can hear in the live tracks. The three last tracks were recorded at Yerevan Tannery Studio in 1992. What you can hear here is slightly different from the previous stuff. Some tempos are a bit intricate and more complex. To summarize: the sound reminds me of Lithuanian maniacs KATEDRA and some keyboards are really similar to Italy’s BLACK HOLE. Sometimes AYAS is close to progressive acts as early LUCIFER’S FRIEND or GOBLIN. This is not Hungary’s POKOLGÉP, Poland’s TURBO or Russia’s ARIA, but if you’re a fan of East European Metal in general, I recommend you to get a copy of this great release. AYAS is active once again from 2008 but they haven’t released anything new since 1991. I’m wondering if they are planning to release some new stuff. I would be interesting to hear new stuff from them. More information can be found here: www.facebook.com/ayas-243801668980474. Interested to get a copy? You can found what you are looking for right here www.ihate.se