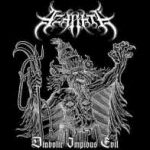 A Polish band with members from acts like DAMNATION, BEHEMOTH, YATTERING or WITCHMASTER, playing Death Metal, with a satanic cover and title of the album… Anyone who doesn’t know what kind of music they are playing? Ok, I explain you then: AZARATH is a four member combo playing brutal and dark Death Metal with big influences from MORBID ANGEL or DEICIDE, as well as some BEHEMOTH ("Satanica" times) or even NILE, and a lot of blastbeats and speed (fucking high speed in fact in some moments, which is not strange at all if we think the guy who plays here is the drummer of BEHEMOTH), and fast solos too. Is it original at all? No. Is it good? Yes, quite good, and really well done, as the majority of bands coming form that country. Just perfectly played, by skilled musicians, but without the so usual VADER influences that the majority of Polish bands use to have, and which bore me a lot. Furthermore, and as usual too with Polish band’s albums, the recording is just perfect, brutal and clear, powerful as hell. The singer growls like a demon, in a gutural yet not too low style. Well, I can’t say much more about this, just take a listen to it if you like the bands I mentioned before, because this just sounds great, and the songs are sincerely good (‘Devil’s Stigmata’ is the best example for me). www.paganrecords.com.pl