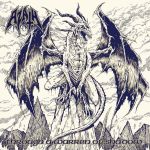 AZATH
Through A Warren Of Shadow
(Pulverised Records)
36:43min

It’s nice to know a band has different lyrical themes than just blood, gore or Satan. For instance, Californian Death Metal band AZATH are inspired by fantasy novelist Steven Erikson’s Malazan books. Having read the first one myself, I’m already interested. But then what? Will there be cheesy lyrics about valiant warriors and battles? Not cheesy ones at least. I was immediately hooked by the band’s ferocity and energy. I was pulled in by their head-on attack of straightforward Death Metal with just a tinge of Black mixed in. Derek Orthner (bass, vocals), Andrew Lee (guitars) and Brandon Corsair (guitars) are a band about business. Without swaying from the path of blasting aural power, without straying from their goal to blister our ears, AZATH deliver a concrete album from beginning to end. After the wailing guitar intro of ‘Into The Charnel’, AZATH’s first full-length “Through A Warren Of Shadow” dives in headfirst with riffs that sear our flesh and vocals that sound like death on ‘Draconian Impalement’. ‘Mortal Sword’ is similar in its delivery as ‘Knight Of Chains’ contains a fury in its guitars that rival the best of any Death Metal band. ‘Through A Warren Of Shadow’ continues the onslaught until ‘Pale Light’ slows it down temporarily, just long enough for us to catch our breath before ‘Worm Of Autumn’ smashes through the gate with glorious impetus. The guitars in ‘The Whirlwind’ are just that… a tornado-like array of demolishing riffs accompanied with ominous vocals. The next two tracks, ‘Children Of The Dead Sea’ and ‘Shifting Forms’ are a blitzkrieg of fast-paced monstrosities, as ‘Dying Echoes’ ends the album with ambient guitars. AZATH didn’t disappoint on their first album. Other than the brief ambient tracks here and there, the band kicked my ass up and down the room I was listening in. It’s always a pleasure to get to the final track and realize the band hasn’t fucked up anything along the way. Here’s to a hopefully long future for AZATH. For more info, check out www.facebook.com/azathdeath, www.facebook.com/pulverisedrecords