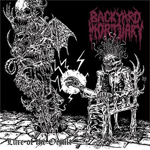 These bloody Australians are so old fashioned! BACKYARD MORTUARY from Sydney are around for more than ten years now, having released only two demos in 2002 and 2005. Neither one of the four guys nor the girl (bass player Bianca) in this band played in any better known band before and so we have a band literally from out of nowhere, more or less. This makes it easy to concentrate on their first album "Lure Of The Occult". And after I heard this album, it seems to me that my introductory remarks are fact. BACKYARD MORTUARY are basically influenced by old US Death Metal bands like INCANTATION, MORBID ANGEL and NILE, focused on, but not limited to the slower speed range. There are a few blast beats to spice the whole thing, like in the opening song (after the instrumental intro ‘Last Rites’) ‘Beyond The Grave’ or ‘Macabre Butchery’. You also find some NILEsque breakdowns (again in the variable opener), technical breaks like in ‘Mutation’ and well done melodic guitar solos (take ‘Diseased’ as an example here). All those ingredients sound like they make up a spicy meal, mainly because the cook (you might also call him engineer here) knew how to do his job and gave BACKYARD MORTUARY a natural, raw and tight production. But for some reason I can’t point out exactly, "Lure Of The Occult" passes me by without leaving too much of an impression. Maybe it’s the focus on the doomier speed, but usually this is something that really appeals to me. It might also be the fact that it sounds too "American". I really can’t say… But I’m sure about the fact that these Australians know what they do, and they do it very well, without a doubt. Old fashioned Death Metal lunatics with a special crush on its American way should check them at www.facebook.com/backyardmortuary or the label site www.bloodharvest.se