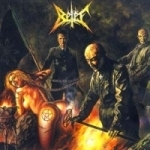 Strangely enough, this album was recorded in 2002 but comes into light only now (2005). BELËF claim MAYHEM, MARDUK and IMMORTAL as musical influences, but I don’t hear that really on this record. To give you an idea of what the music of BELËF is about, let’s say that they play a furious blend of Death / Black very similar to the brand pioneered by ANGEL CORPSE and continued by ABOMINATOR (for the impetuosity), mixed with the strange kind of modern Black Metal played by December WOLVES on their seminal (and sadly last) album “Blasterpiece Theatre” (for the complexity and the overall sick atmosphere exhaled by the eight tracks on offer here). “Infection Purification” beneficiates of an excellent production, and the playing abilities of these musicians is far more than convincing. The vocalist Morrdred does a lot for the credibility of the whole band, his performance throughout this album reaches the fringes of inhumanity, and “intense” would be a feeble word to qualify his vocals. What pleases me the most here is the one-million-riffs-per-song philosophy ruling the composition department; all the songs are insanely complex and could be compared to eerie cyclones of sounds and screams. At no moment the pace shows the lesser sign of slowing down, the band stay tackled on the hyper-speed mode all the time but without inflicting boredom to the listener in the end. In fact, I love this kind of record because it holds all the promises it could suggest in the first place. This kind of unrestrained brutality cleanses the soul and makes one feel good while confronted to the mediocrity of this world. “Infection Purification” is truly a Death feast, an orgy of demented riffs and yes, it is a purification of sort. Note that within the time separating the actual recording of this album from its release a slight line-up change occurred, with guitarist Abramemech and vocalist Morrdred now accompanied by a new bass-player a new drummer. And to end this review, I admit that the cheesy cover of the album (drawn by Jean-Pascal Fournier, usually less sick than that!) caught my attention in the first place! To sum it up, a fantastic release by a band I will keep an eye (and an ear too) on for sure! You can acquire this gem without a single afterthought. www.belef-war.com.