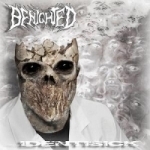 I honestly don’t even know where to start with this… this album is full of gratuitous indulgence in every element I detest about modern Death Metal. This is the fourth album by this French band and most of what I have read (including their own myspace page) seems to suggest that this album is the best they have released. I assume that this band is on MTV by now. It’s Metal for guys who wear shorts to show off the tribal tattoos they have on their legs… Metal for all my bros out there that like to start SICK pits… Metal for glossy magazines… Metal for people who write reviews for Metal Archives (average review 95%!!!!)… Metal for people who get most of their music information from Myspace (as of today, BENIGHTED have 7820 Myspace “friends”!). I want nothing to do with this garbage. Musically, BENIGHTED play (in their own words) “very effective” Metal with some “fast and groovy tracks” that is a “mix between brutal Death Metal and some influences such as Thrash, Grind or Hardcore.” Really, it is just generic Death / Grind with slick production and about 6 different vocal styles (sometimes in the same song) and every song has some “chugga chugga” parts so you and your buddies can act out your repressed homoerotic urges moshing in the pit. Honestly, before looking at any photos of these guys, I predicted shorts and baseball caps and at least one member with dreadlocks…I was right. Don’t get me wrong, I am not here to assess anyone’s fashion sense (and if you ever see me you will know that I have no room to judge) because, really, if the music is good, I could give a fuck what someone’s image is like. But the fact that this band is so predictable makes this all the more laughable. I am sure a lot of attractive European Metal sluts are way into these guys so they probably don’t give a shit what I have to say about their record (I was disappointed by the lack comments from females on their Myspace page, however. I was hoping to at least be able click on some links to some young girls with dyed black hair, scarred arms, and no clothing… again, BENIGHTED, you have let me down). The best thing I can say about these guys is that they are technically proficient and occasionally have a few good riffs and a decent guitar tone that in a different context might be enjoyable. www.staybrutal.com www.myspace.com/brutalbenighted