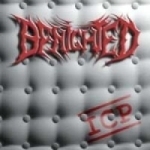 BENIGHTED was formed back in 1998 in the Lyon area (France). Initially they reportedly played a mix of Black Metal and Death Metal, but now they seem to concentrate only on the Death side of things. Well, this album shows qualities (like competent but not striking musicianship, a real effort to come up with original arrangements and rhythms) but also flaws (the production, held in Germany, gives the album an overall synthetic sound, especially in the drums department, and the tracks remain unmemorable and banal, adding to all this the now mandatory shrieks / growls combination that does nothing to me). I admit I am certainly biased against my homeland scene as I have always felt the French lack the extra-special something that makes bands of other countries (especially the USA, Brazil and Poland when it comes to brutal Death) so enjoyable. It is like the French dudes are followers instead of leaders, and I don’t see the things change in a near future. The sure fact is that BENIGHTED can’t pretend to the throne of the Death Metal gods, because their music doesn’t make a durable impression, like 90% of the present productions. "Internal Cephalic Production" cannot enter in my book of remarkable records and suffer the comparison with a superb outfit like, let’s say, DEEDS OF FLESH. Average brutal Death, nothing more. www.staybrutal.com.