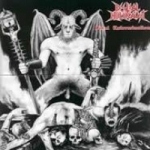 What is underground? Underground in my opinion is to look out for new bands from all possible places on this earth. To review a Thrash / Black Metal band from Bolivia fits to my definition and therefore this is a review highly dedicated to the worldwide underground Metal scene. BESTIAL HOLOCAUST from Bolivia already released a few recordings and this tape I have in front of me is some kind of rerelease but I’m not sure here as I got no info sheet with this recording. This tape contains 10 songs where the first 8 songs are from the "Final Exterminacion" recording originally released from Kill Yourself Records in 2005. ‘Legion’, one of the remaining 2 songs was recorded in 2005 and the other one (‘Devastacion’) in 2001, already before their first demo "Odio Y Muerte" was recorded. Well, I might be wrong here… BESTIAL HOLOCAUST sing in Portuguese if I interpret it correct and the singing is really interesting as it is done by a female sounding a little bit like Schmier from DESTRUCTION, especially the high screams. Sounds fuckin’ awesome if you ask me. The music itself is Thrash / Black Metal with these dominating vocals, has a typical South American vibe which suits this band really well. In fact I have to say that I’m kinda impressed. Rawblackult Productions from Bolivia is the label who’s taking care for this release and as far as I know they only release tapes up to now. If you are searching for some quality underground Thrash / Black Metal, far away from being high technical and overproduced this recording might be the perfect buy for you. If you are interested in the tapeversion check out www.rawblackult.com or write an email Carlos directly at rawblackult@hotmail.com. If you are interested in the CD version you probably have a chance in contacting the band at their myspace page www.myspace.com/bestialholocaust. Recommendable!