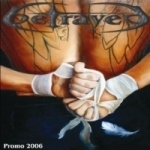 Here we have a new pomising band from Germany. Promising because they play Death Metal, real Death Metal in a way that is quite rare anno 2002. Indeed I have listened to the tape kinda often in my car, showing it to some friends or just let my enthusiasm flow while banging my head while driving! The band offers old-school Death Metal with some nice, effective riffs and cool rehearsal sound. Harsh, raw… the way I like it! Not overproduced but with the right atmosphere. Of course the material isn’t brilliant and the musical skills of the band not perfect yet but that’s fucking unnecessary because it kicks ass! It’s well done Death Metal with some Thrash oriented riffs as well and it’s just good to have some bands in Germany that still hold this banner high! I am curious about the future of the band. Ah ye… I have also visited their homepage and what I missed was a certain concept that surrounded the band and what I think is damn important to earn some more success and to stand above the average! But that’s what most bands miss today…! Work on that! The Promo is available on CD as well so have a look at www.metalized.de to get in touch with those newcomers!