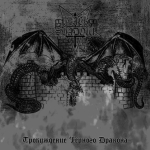 Lord Demogorgon and Asmodeus are the main duo that are responsible for creating this pitch-black Russian monster known as BLACK SHADOW. They have often been accused for being a cloned Russian version of the Swedish Black Metal arts DARK FUNERAL, but on the other hand there’s just a bit more to their sound than being your 100% water-proof DARK FUNERAL clone act. “Пробуждение Чёрного Дракона” (“Awakening Of The Black Dragon” in English) is BLACK SHADOW’s 7th full-length album, and there’s undoubtedly lotsa Swedish melodic Black / Death Metal worship (à la NECROPHOBIC, MÖRK GRYNING, DARK FUNERAL and such legions mostly) to be found on this record, just no doubts. Despite the programmed drums, this dynamic duo makes it all sound like there could a full band behind BLACK SHADOW. Overall BLACK SHADOW is able to create a pretty respectable amount of chaotic and light-speed parts within their songs on this record but somehow they still don’t sound too over-the-top at all because after this momentary vicious whirlwind of blackened aggression, they always tend to find certain breaks from their Black Metal machine, just to allow a listener to take a breath or two before their satanic hammer starts falling on their heads again. 11 songs within 60 minutes may feel like too much for a Black Metal release, but then again if it’s all enjoyable and entertaining from start to finish, no one should complain. I for one, did enjoy the heck out of this 7th BLACK SHADOW album though. More about BLACK SHADOW at: www.facebook.com/black.shadow.official, label: www.morehate.com