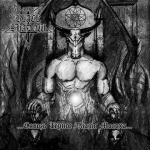 More hate shall be spread… the Russian 2-man Black Metal horde BLACK SHADOW smashes all the icons and crucifixes down and make all the hypocrite Jesus lovers weeping on the band’s 8th studio album, titled “…Сквозь Чёрное Пламя Молоха…”, which English translation is “…Through The Dark Flame Of Moloch…”. My first impression about this particular release was, this must be BLACK SHADOW’s most diverse sounding album to this very date, in which they have also concentrated on creating something else but just those infamously blackened and merciless hyper-speed blast-beat mayhems 24/7. For example in the 2nd song off this record, “Несущий Дар Запретного Ремесла (“The Bringer Of Gift Of The Forbidden Craft”)”, a healthy dose of Death Metal riffage is present strongly, which I like myself a lot. Those much ‘despised’ and ‘hated’ DARK FUNERAL influences are still offered on this opus but this time, in very tiny doses only. Somehow it’s this another already disbanded Swedish Black / Death Metal troop named ALLEGIANCE whose name seems to come to the surface more often than DARK FUNERAL’s name this time, just probably due to this increased musical diversity within their stuff on “Несущий Дар Запретного Ремесла”. Demogorgon and Asmodeus in BLACK SHADOW really do have a good concept in their hands to make a high quality Black Metal stuff – just like this album proves it so loud, clear and somewhat deliciously. More about BLACK SHADOW at: www.facebook.com/black.shadow.official, label: www.morehate.com