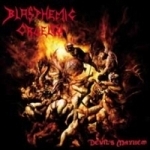 Although it’s unfortunate for any band to reach fame by force of repute, it looks like that’s all this band has going for it. Their main attraction is the fact that their drummer is a woman; a little unheard of in the Metal world. It isn’t without precedence, like the EBONSIGHT and ASTARTE bands, for instance, but it’s still a curiosity. Sadly enough, EBONSIGHT may have been unique, and ASTARTE remain a force to be reckoned with, they never quite fullfilled their potential despite their respective talent. Since BLASPHEMIC CRUELTY appears to have little talent to start with, their prospects look grim indeed. This album doesn’t deliver the fiery inspiration it sports on its cover, it sounds like old age. Sad considering the guitarist played in ANGELCORPSE, a band worth its weight in gold. www.blasphemiccruelty.com, www.osmoseproductions.com