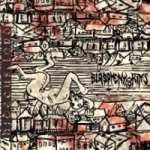 Pagan Records has a reputation to uphold. This is, afterall, the label which gave bands like FUNERAL WINDS, SACRILEGIUM and BEHEMOTH their start. One should rightly expect them to sign only the most severe of bands. With the style of Black Metal pioneered by BLASPHEMY popular in the underground today, care must be taken so as not to dilute the scene with mediocre talent. It’s a good thing Pagan Records are more discerning than the average label. BLASPHEMY RITES is a fantastic new band, unrelenting in the extreme. The atmosphere they conjure is like a black hood violently shoved over the head of the listener, suffocating him to death. This is how Death Metal should be: angry, vicious, not-overly technical, but still pushing the limits of human performance. www.pagan-records.com