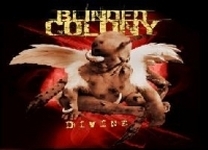 Already the new SOILWORK? Ah, no – it’s BLINDED COLONY. Yes, especially BLINDED COLONY’s vocal harmonies remind me quite a bit of SOILWORK. More accessible than “Figure Number Five”, though. BLINDED COLONY are far from reinventing the melodic Death Metal genre and to be honest: I’m glad about that. They’re good songwriters, mainly delivering hymnical, midpaced stuff that seems to be predestined for live situations. Listening to “Divine” really creates images of sweating bodies in a smoky club. Maybe this one could need some more aggression – maybe not. The following might illustrate my words: song number 8, namely ‘Demoniser DCLXVI’ reminds me a LOT of Hamburg’s Power Metal demons PARAGON (although I doubt that BLINDED COLONY know about them). Especially the chorus – in particular the lines: “Riiipped to pieceees” sound totally like Buschi without reaching PARAGON’s singer’s power. The same with the last song (not so much the chorus, though): not only the rough, melodic voice but also the style! The thing is: PARAGON sound much more aggressive than BLINDED COLONY although one might still consider BLINDED COLONY to be melodic Death. Personally I like both bands but I’m glad I didn’t have to buy “Divine” as it’s a fairly short CD. But at least there are no fillers on here. Not really.