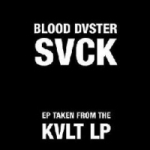 New BLOOD DUSTER album is officially the most "KVLT" release… ever! Forget your BURZUM’s and the legions of obscure bands, releasing 50 copies of a tape but still posting it on the internet. Which is all good, we need our dose of heavy shit! Preferably daily! And so we head to all blogsposts and torrents and shit and get that latest album for free. No one fucking thinks whether the actual band wanted you to have it for free or not. OK, I hope that most of the true fans are still buying actual CDs and LPs, but at best it can cover the producing expenses and earn an extra buck which will be inveseted in the next project. So what if some band decided just to do it their own way and release an album which can’t be played. That band is BLOOD DUSTER. They’ve recorded the songs, made the dubplate, destroyed it scratching in KVLT and pressed the actual LPs. Don’t fuckin’ play that shit or it will fuck up your stereo! The songs will be played live (and you’ll probably can watch it on YouTube), but no one, even the band, doesn’t have a complete recording. Here’s the official statement of intent: So only 5 songs have been salvaged and presented as a digital EP release called "Svck". And those kick some fuckin’ ass! First of all it must be said that Dave Haley for PSYCROPTIC really speeds things up to the insane levels and displays mindblowing drumming on a second track ‘Symmes Theory Of Concentric Spheres And Polar Voids’. That shit hits you like a 1000 ton brick on the head and drags into a black hole. Next one ‘Knee Deep Pt.4’ is a perfect 48 second display of why BLOOD DUSTER is the only band who can mix insanely fast Grind with pant dropping groovyness! The sound is a great balance between razor sharp riffs, heavy as fuck bass, speedfreak drumming and troglodyte vocals of Tonebone. After that comes a biggest mindfuck in the form of ‘And Fuck You Too’. It’s heavily feedback drenched exercise in ripping your nerves apart in order to reach psychedelic grindvana. It reminds me of NIGHTSTICK, the band which released a couple albums on Relapse back in 90s. It lasts for 5:19 minutes and shows off a nihilistic side of BLOOD DUSTER in full glory! It’s a nice break before the last catchy, rocking Garage / Grind track ‘The Band That Fame Forgot’. The solo on it is fucking amazing, Eddie Van Halen would kill for it! So there… BLOOD DUSTER has pulled off a complete satisfactory "fuck you" for people who download shit for free (i.e. 99% of us) and some of them are crying the rivers for it. But for me persoally this is the ultimate statement from the band and a sign of integrity to sticking to whatever they want to do and at the same time keep themselves and fans entertained! Play this EP at least 5 times in a row and imagine that you just had your little piece of "Kvlt". All the info about the album here: www.facebook.com/pages/blood-duster-official/245964317831