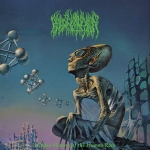 “Hidden History Of The Human Race” is the second full length album from the American band BLOOD INCANTATION, recently released by Century Media Records. Almost 36 minutes of technical and progressive Death Metal, strongly influenced by Sci-Fi, aliens and spacey themes. All concentrated in four long songs with one of them that lasts 18 minutes. These guys could be described as a Death Metal version of KING CRIMSON and RUSH. But if we talk in terms of extreme Metal, BLOOD INCANTATION sound like an amalgam of the most progressive incarnations of DEATH, CYNIC and ATHEIST with a brutal approach in the vein of IMMOLATION, BRUTALITY, NOCTURNUS, early NILE and MORBID ANGEL from “Domination” and “Formulas Fatal To The Flesh”. The guitar riffs have a strong dissonant and atonal touch very reminiscent of the works of Robert Vigna, whereas the rhythmic parts are close to technical Floridian Death Metal. The production is clear, but with a very heavy and brutal old school feeling, all able to create a cosmic, astral and obscure atmosphere. Then we have a solid guttural voice, a powerful bass and a pretty technical drumming with some jazzy parts in the vein of Steve Flynn and Sean Reinert, all mixed with more brutal beats à la Pete “Commando” Sandoval and Steve Asheim (too bad that there aren’t gravity blasts too). “Hidden History Of The Human Race” is for sure one of the best Death Metal albums of 2019 together with the last efforts from TERRORIZER, MONSTROSITY and NOCTURNUS. In conclusion, if you’re into technical Death Metal from the ’90s and Sci-Fi themes, BLOOD INCANTATION are the answer. Buy it or die! www.facebook.com/astralnecrosis, www.centurymedia.com