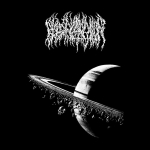 After having a brisk and live-affirming breakfast to which “Interdimensional Extinction” was my background melody, I can’t say more besides this is a descent Death Metal record. It contains a pool of nice ideas. But it doesn’t go anywhere into unexplored waters. You pretty much get what you expect. Deep atmosphere, dissonant melodies, a rolling thunder drum and lay back guttural vocals. The songwriting qualities on “Interdimensional Extinction” are somewhere between uninspired and insecure. Nothing you haven’t had a couple of times before. More like the simple multiplications of modern Death Metal with some Progressive and Doom elements. There are a few breaks or samples which enable some highlights. But it’s primarily based on the technical ability of all of them. Everyone obviously knows how to play his instrument. The recording is as well as the mix. Everything is tight and has the right space. But as lame as my words are, as uninspired is the record. It just doesn’t have any ambition. It seems BLOOD INCANTATION is one of those bands where, if you look at the list of bands the members play in, you ask yourself if focusing on a bit less would help to create something more interesting. “Interdimensional Extinction” is a descent Death Metal EP no more no less. www.darkdescentrecords.com