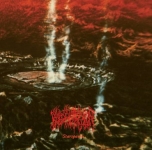 BLOOD INCANTATION’s lyrical themes on metal-archives.com are listed as Anunnaki mythos and astral death. I can honestly say I’ve never seen that description for a Metal band before. Denver, Colorado has spewed out Death Metal that’s both fresh and old school at the same time. BLOOD INCANTATION delivers their first full-length… a five-song eruption of dirty, crunching guitars which inhabit the opening track ‘Vitrification Of Blood’ along with dungeon-dwelling grime in ‘Chaoplasm’. Paul Riedl’s deep growling pervades each track with aural intensity. ‘Hidden Species (Vitrification Of Blood Part 2)’ barrels through with a ram-headed bludgeoning weapon of destruction, while the guitars chug and swirl through a miasma of Death Metal mixed with a very very slight technical appearance. The fourth track slows down the momentum with ‘Meticulous Soul Devourment’, which would have been better as an intro or outro to the album. But then the final track ‘Starspawn’ kicks in with a face-smashing track of burrowing Death Metal filled with a little progressive elements and a small amount of Doom thrown in for good measure, before charging full steam into the ending moments of the album. "Starspawn" is a highly enjoyable romp through Death Metal madness. For more information, check out www.facebook.com/blood-incantation-508899805936788, www.darkdescentrecords.com