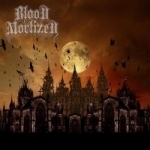 “Swedish old school Death Metal at its best” is Vrykoblast Productions announcing BLOOD MORTIZED selftitled debut album. An album which is already available since a couple months, some might have recognized that already. The band claims on their myspace-page that “The music is heavily influenced by old school Death Metal from the early 90s, mainly from the golden Studio Sunlight era”. These words let us hope for a typical old school Swedish Death Metal band, right? Fuck yeah! Though seeing them in relation to the debut albums of Swedish masters such as ENTOMBED or DISMEMBER might be wrong, indeed they sound Swedish, borrow the crunchy downtuned guitarsound and yes, this doesn’t sound like something special in those days of “old school-newcomers”. Nevertheless I like their kind of refreshing Death Metal, more close to “Those Shredded Dreams” by FURBOWL or “Wolverine Blues” by ENTOMBED than to “Left Hand Path” or “Like An Everflowing Stream” which is probably not “old school” in the common sense of the Death Metal vocabulary, but does this make them really sound less old school? Fuck no! For me it is a natural progression within the Death Metal genre and perhaps it is a repetition of 1992 (when “Those Shredded Dreams” was released) and 1993 (when “Wolverine Blues” came out) to develop Swedish Death Metal in this direction. As this band carries former members of bands as AMON AMARTH or CRYPT OF KERBEROS (to name just two) you might feel that some experienced musicians are involved here. It seems as for them the songs are more important than the overall attitude to sound as typical as “requested”. One hour of old school Death Metal for those who followed the evolution back in the days will love these tunes and might figure out a fantastic new band after purchasing this goody from Vrykoblast Productions or from your local record dealer or mailorder. Check out the band’s myspage-page at www.myspace.com/bloodmortized or the label’s homepage at www.vrykoblastproductions.com.