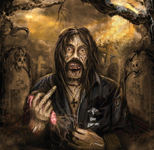 How would and should classic Swedish melodic Death Metal sound like, if the scene hadn’t been divided into thousand fragments, where some took it darker and violent, others utterly brutal and others again progressive and lighter, how would it have sounded if the style had progressed nicely and slow since its inception in the mid to late 80s? A bit like BLOOD MORTIZED today is my guess, as they finally seem to have found themselves, with this third full length opus of theirs. The band is made up of a few veterans within the Swedish Metal scene, and had a few more at the band’s beginning, though there have been added some fresh blood the last few years, not that, that have made the band weaker in any means, if nothing, stronger and more focused. Though let us get back to the new record, a dark melodic Death Metal album that weaves together a painting of darkness, desperation and beauty. The dark atmosphere is spun throughout the album and is haunted with desperation and melancholy, aggressively abrupted by anger which is laid to rest by well-crafted and great melodic guitar work. The songs are well written and is tied greatly together by wits and good musical decisions. I haven’t been much impressed by BLOOD MORTIZED during their career, though they’ve done some solid songs, and with "The Demon, The Angel, The Disease" a solid album that is quite fitting for the dark season we are in the midst off right now. Where BLOOD MORTIZED used to jog around in mid-paced darkness, they are now wandering around all over the palate, still with the mid-paced and very heavy base, though we are getting some more speed here and there, and some slowed down moments, both dark and doomy, and some with beautiful melodic guitar play, the more varied output gives the band an edge, which they have lacked, and makes the album somewhat stronger, lasting and quite enjoyable. A fierce and atmospheric dark attack of Swedish Death Metal with a ton of good melodies, great guitar work, pounding drums, vocals from the netherworld, rumbling bass lines, the perfect companion for a cold winter night! Join the sabbath in the mortuary: www.facebook.com/bloodmortized, www.youtube.com/bloodmortized, www.chaos-records.com