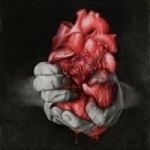 If you’ve been reading this webzine at least for a year, you probably came across of BLOOD MORTIZED’s "Bestial" review when it came out as a self released EP featuring 3 tracks of pure "meat and potatoes" old school Swedish Death Metal. Anyways, "Bestial" has been re-released by Chaos Records with 1 bonus track ‘Of Dust & Doom’ as a limited edition 6 panel CD digipak. The bonus track is a monolithic piece of slow and crushing Death Metal driven by a sort of tribal, ritualistic drum beat, it sort of ties other tracks together and adds a little variety to usually mid-paced Death Metal practiced by BLOOD MORTIZED. Nothing groundbreaking here, but all songs are performed with top notch class and roaring fire burning in their veins, you can hear some old EDGE OF SANITY and especially FURBOWL influences creeping beneath the surface. If you missed "Bestial" as a self released 3 song EP, get it now as an expanded version and enjoy this perfect slab of heavy, shredding Death Metal with a pure old school Swedish Death Metal sound! This EP made me check out their first self titled album and let me tell you I was blown away too! Definitely looking forward to their upcoming second album "The Key To A Black Heart" on F.D.A. Records! www.myspace.com/bloodmortized, www.chaos-records.com 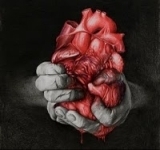 It’s getting cold out here, Winter’s getting closer in Germany. And goosebumbs early in the morning as addition to cold temperatures isn’t the most entertaining thing, you know. Not sure if this was the goal of BLOOD MORTIZED but they succeed with ‘Bestial’ – the opener of their upcoming EP which caused the spoken goosebumbs for me. It’s fuckin’ amazing if you start your car early in the morning to drive to work, switch on the car stereo and get fuckin’ blown away with a shredding guitarriff on a marvelous old school sound! Traditional yet awesome! BLOOD MORTIZED may not be that original, nevertheless or especially songs performed and recorded in that high standards are fuckin’ killer. Nothing else. The sound on this new EP is awesome and the guys matured in a more than positive way compared to their first album. The musicians are old fuckers (sorry guys!!), all of them probably in their thirties for 1-2 years now (bootlicking, hehe), but still kept their teenage aggression and mixed it with the experience of long-time musicians as they are. The opener ‘Bestial’ is a traditional Swedish Death Metal song, somewhere between DISMEMBER, EVOCATION and old EDGE OF SANITY. ‘Shadow Of The Quarter Sun’ goes in the same direction especially when talking about the reminiscences to EVOCATION. The real killer comes at the end with the slow and atmospheric ‘Rekviem’ with a great sounding choral at the end of the song. Above all influences I have to mention once again, as in my review to their selftitled debut, the huge dose of FURBOWL (first album) in their songs. This EP is a huge progression to their debut album and a perfect appetizer to their upcoming 2nd album "The Key To A Black Heart" which will be recorded soon. I’m not sure which label will release this EP, what I know is that the band is planning to release it on CD, vinyl and tape. So better watch out for this and keep an eye on www.myspace.com/bloodmortized for information about this EP.