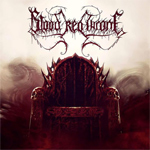 I’ve been with BLOOD RED THRONE most of the way, I was reviewing away when they released their first, and only demo "Deathmix 2000" back in 2000, and was blown even more away when the debut "Monument Of Death" hit me straight in the face a year or so after. Then the band switched from the quite clinical production that haunted the debut, which I strangely enough seemed to like back then, to a more organic and smashing sound after that, still being driven by the enormous riffing talent of Tchort and Død, I was bliss. Time has been moving since then, I’ve been reviewing most of the releases from the band, a couple might have slipped the last few years, and as I haven’t been paying that much attention to the scene, as I used to, it had also slipped my attention that Tchort had left the band, and that Død more or less has reignited the killing machine with fresh blood. When I first was listening to this new piece of carnage from BLOOD RED THRONE, I wasn’t exactly aware of all that, that came nice and quietly as I was getting into the review mode, and checked up on what had been going on in the writing and recording mode of "Blood Red Throne". The band is as fresh and energetic as ever, the spark has been fused and we are served blistering Death Metal from the very beginning to the end, trademark BLOOD RED THRONE bashers, groovy and grim over the edge brutality, a few melodic and pretty pieces combined into even more blood drenched brutality. The riffing is immense and the wall of guitars are almost always present, on top of the backdrop from the maniacally drumming, a fierce and intense tour de force of Death Metal backbone deluxe, damn the brutality and intensity. I actually don’t know who has produced or mixed the album, though it’s been handled very well, the instruments are all present and even the bass is alive and heard, been a while since I’ve had such an alive bass on a brutal Death Metal album. I’ve read a few commentaries on Facebook regarding this album, and most of them have hailed the music as insanely well done, though most of them disliking the vocal effort. I don’t really get that, the guttural dusty straight to your face growl, combined with some sick screams, what is there not to like? A new Corpsegrinder in the making, not as complete yet, though it’ll might come, I find the vocals suiting for the brutality, a grim match made in an unholy matrimony with the insanely intense and ripping riffing. I don’t think BLOOD RED THRONE has made a bad album throughout their career, though a couple haven’t exactly been up to par, though this new incarnation of the band has taken on the battlefield and slayed what they’ve found on it. I’m convinced about this album and the future of the band, after countless spins of this slayer. Death Metal Norway has returneth! The ravenous warmachine awaits you: www.facebook.com/bloodredthroneofficial, www.reverbnation.com/bloodredthrone, www.sevared.com