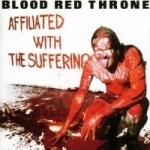 First of all I can tell you that without any doubt “Affiliated With The Suffering”, the second album of Norway’s BLOOD RED THRONE, is much better than their mediocre debut “Monument Of Death”. The latter sounded too sterile, too clinical for a band that claims to play old school influenced Death Metal, because focusing on the right technique and riffing does not automatically make you old school – you have to ressurect the feeling that made old DEICIDE, AUTOPSY, old CANNIBAL CORPSE or MALEVOLENT CREATION so fascinating in the early 90s. On “Affiliated…” BLOOD RED THRONE seem to have realized this and improved production-wise, reduced technical excesses, concentrated on a more direct songwriting and the creation of cool riffs to come up with a natural, consistent, entertaining Death Metal album that respectfully pays its tribute to the bands I mentioned above. Just listen to ‘Bleeder’s Lament’ (which includes a nice CANNIBAL CORPSE homage in for of a bass fill, that reminds me of “The Bleeding” album), the heavy ‘Chaos Rising’ or ‘Mandatory Homicide / Death Inc.’, all really good songs. But there are things I’d like to criticise as well, especially the again just mediocre vocal performance of Mr. Hustler, his growling is ok, but also quite emotionless and not very individual! Listen to old DEICIDE – pure fucking hatred, AUTOPSY and CANNIBAL CORPSE – perversion and brutality, MALEVOLENT CREATION – total aggression and intensity, this is a weakness many Death Metal bands have today, cool music – boring vocalists!!! Also the rather short playing time of 39 minutes (including almost 6 minutes that are occupied by two bonus tracks, that will only appear on the limited digipak) annoys me. To sum it up, “Affiliated With The Suffering” is a good Death Metal album, nothing more, nothing less. And before I forget it, the OBITUARY coverversion is awful and the best prove for my “boring vocalist”-thesis! www.hammerheart.com