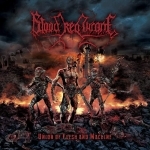 The Norwegian powerhouse BLOOD RED THRONE is ready with a new album – and a new label, which hopefully will bring the brutalitarian regime out to the masses – and once for all cement their status, as the most brutal Death Metal stable the country in the North has to offer. Ten tracks of senseless beatings woven into a painting of hatred and despair, a lack of belief in the future, earcrushing grooves, necksnapping breaks, great riffing, pounding rhythm patters and a varied vocal attack. On top of that, add a cover version of JUDAS PRIEST’s ‘Leather Rebel’ off "Painkiller" – a Heavy Metal hymn done the Death Metal way, and it actually works! The band has always been progressing through out the years, though they have become more and more brutal and relentless during the years, and have on top of that now had a stable line-up for two albums, besides the original drummer Freddy Bolsø who has returned and replaced Emil Wikstein, who handled the drums on "Brutalitarian Regime" and "Blood Red Throne". The sound is more dynamic and ‘playful’ and has some more energy and intensity compared to "Blood Red Throne", and the production is also a tad more dynamic and organic and overall more powerful, which really fits the band and the music. "Monument Of Death" and "Affiliated With The Suffering" will always hold special places in my heart, though after those two, this album must be the best effort from the Norwegians so far, after a night, listening through their discography. "Union Of Flesh And Machine" ties the knots and collects the best pieces of the past, and takes it a step further – and again, a really well done cover of the mighty PRIEST! Enter the graveworld right here: www.facebook.com/pages/blood-red-throne-official/184456838242524, http://bloodredthrone.bandcamp.com, www.candlelightrecords.co.uk