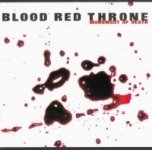 Death Metal from Norway! Before joining EMPEROR in late 1992, Tchort had already relaesed a demo with his Death Metal band GREEN CARNATION (now IN THE WOODS). When they got together in 1998 they didn’t play Death Metal anymore, so Tchort decided to do his own thing and among others he found Død (SATYRICON) to join him. Some of the riffs were supposed to be on EMPEROR’s “Anthems…” which makes this album quite variable, still, this is pure Death Metal, you won’t find Black Metal passages too easily. On the other hand, “Monument…” is not quite as heavy as some other Death Metal acts, especially because it’s not straight forward all the time (but far from being too complicated) and because the production could be a little more brutal. So in the end you get a piece of brutality both not too simple (so you won’t get bored too fast) and not too complicated. Also available on vinyl!