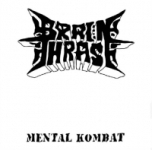 Thrash Metal is always a good game for everyone whenever it’s well-executed, comes straight on your skin and overall has something special on it that clearly grabs your attention immediately. This Finnish Thrash Metal group named BRAINTHRASH was first formed in 2005 but disbanded in 2007 after releasing a 3-song demo called "Major Mayhem" in 2006. BRAINTHRASH made their ‘comeback’ again in spring 2012, and after some hard rehearsal sessions, this 2-piece Thrash Metal combo was ready to record 3 new songs that ended up on their 2nd demo, titled "Mental Kombat". With the line-up of Total Nevastator on guitar, Kamikazernobyl on vocals and drums, Jari Oinonen on bass (also in FORCED KILL) – added with a couple of guest solo guitarists, Kimmo Utriainen (LATERN, DEATH THRASHERS KUOPIO) and Juhani Flinck (DEAD SHAPE FIGURE), this bunch has managed to create a pretty impressive sounding release that somewhat devotedly obeys some of the ground elements of the Bay Area Thrash Metal sound. Yes indeed… the Bay Area styled Thrash is what the guys try to create via BRAINTHRASH’s very riff-orientated Thrash Metal – and in my sincere opinion, they have also succeeded well at their attempt to re-flame that classic Bay Area Thrash sound on the "Mental Kombat" demo. VIO-LENCE seems to be that band in particular that has had the greatest impact on BRAINTHRASH’s sound, with small portions of early DEATH ANGEL and EXODUS added in for a good measure. All the 3 songs work well – with all of those familiar background gang shouts that truly tend to hark back to the heydays of the Bay Area Thrash sound, and I don’t just see any reason for that why an experienced Thrash Metal digger wouldn’t find something good in them. BRAINTHRASH do their Bay Area Thrash copycatting shamelessly, and they should be proud of it, too. To contact the band, go to: http://brainthrash.bandcamp.com/track/mental-kombat, or email them at: brainthrash666@gmail.com