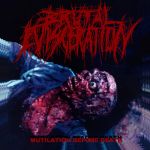 There’s a new band in my hood and it’s called BRUTAL EVISCERATION. To date, they recorded an EP last year and just now they released their first full length album “Mutilation Before Death”, both yet only available in digital format. Hailing from the area around Bremen, the four guys in the band are pretty blank pages up to now, so I presume the guys are rather young. Yet their music doesn’t sound like that, as BRUTAL EVISCERATION are devoted to an utterly brutal kind of Death Metal. Their stuff is close to Goregrind at times and is delivered more than raw and ultimately violent. Just a kind of Death Metal that I haven’t heard in years. If you look for technical brilliance or frilled playing, you’re definitely wrong here. If you’re looking for at least decent harmonies or virtuous guitar leads, you’re either on the wrong path with “Mutilation Before Death”. What you get from BRUTAL EVISCERATION is nothing but the most sick Death Metal you can imagine, garnished with guttural vocals of the most violent kind. Song titles like ‘Extremely Rotten Flesh’, ‘Beneath Reeking Entrails’ or ‘Maggot-Filled Cadaver’ speak for themselves. Personal opinions? Well, I absolutely admire how BRUTAL EVISCERATION stay on their course without any smarmy approach. And there’s something I dislike on the other hand, because the electronic drums used for the recording of “Mutilation Before Death” sound a little absurd sometimes. I guess “real” drums would have been a better choice for even more brutality. But anyone who feels addressed should visit the band at www.facebook.com/brutalevisceration or check out the album at https://brutalevisceration.bandcamp.com