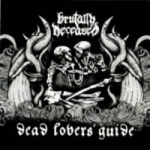 Talk about wearing your influences on your sleeve. Then talk about tribute bands. And then talk about BRUTALLY DECEASED, a Czech based entity of nostalgia-laden fiends, whose main goal might well be building up the time machine often quoted by both science fiction writers and aging Metalheads alike. Destination and time period in case? Stockholm, around 1990. Location? Sunlight Studios. Why yes, welcome to the world of BRUTALLY DECEASED. These guys have faithfully replicated both the sound and style of those days long gone with such accuracy that it’s frightening, actually. Lack of originality aside, the band definitely knows its strong points and have wisely used them to their advantage, which especially applies to the oh-so-familiar, yet always exciting and up-front, guitar work. Now that is a good example of mixing some melodic solos amidst the crunchy and crusty riffs, nicely supported by the well pronounced low-end and blasting drumming. The songs are concentrated outbursts of energy that more than show conviction to the chosen genre and while certainly not grounbreaking “Dead Lovers’ Guide” is one of those albums that hardly can be put aside as worthless and boring. Also, am I the only one who thinks that covering ‘Override Of The Overture’ on what is, more or less, an album of essentially DISMEMBER-esque worship, could be some good ironic joke on us – the reviewers? Oh well, then… www.myspace.com/brutallydeceasedband, www.myspace.com/lavadomeprods