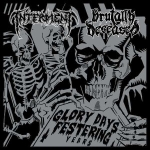 “Classic Swedish Death Metal” like sounding bands (both newcomers and the dinosaurs that made a comeback) and splits are some of the most typical “hit and miss” things yours truly could ever think about, but once a release carries the logo of the Swedish INTERMENT – it’s surely worth to check out. My personal introduction to INTERMENT’s music was through their excellent split with FUNEBRARUM, where both the new tracks and the ‘Into The Grave’ cover sounded like this band had never been on a long hiatus. A reissue of INTERMENT’s old demos and an extremely well produced debut full length album followed and now, 3 years later – INTERMENT provide 3 new tracks, in collaboration with the Czech “Svenskdodsphilliacs” BRUTALLY DECEASED. Fortunately, it’s not a case of a “1-sided” split, where only one band delivers good tracks. Fans of INTERMENT know what to expect and shouldn’t be disappointed. The production, however, is a slight step back from the full length. While the drums still sound great, very organic and without any annoying clicky bass drum sound whatsoever, they sound slightly less powerful than they do in the album. Pretty much muting the bass drum is an awesome idea, though, which I wish that many other extreme Metal bands had used. INTERMENT’s guitar tone is colder on this split than it is in the album, but those who aren’t super pretentious about production probably won’t care about it much. Overall – INTERMENT delivers again, and BRUTALLY DECEASED will make die hard Swedish Death fans satisfied as well. They are heavily influenced by GRAVE and it’s pretty much all that is needed to describe what they have to offer, but they do stand out production-wise (in a very good way!), they know how to write good riffs and their vocals sound horrific in a very impressive way. While originality is not their strong side, they do have the quality that many other bands that attempt to create something similar lack. When all is said and done – there is not much new under the sun, but it’s still a rare case of a “double sided” split, which is fun to listen to from start to finish. For all further information check out www.doomentia.com, www.interment.se, www.facebook.com/interment, www.facebook.com/pages/brutally-deceased/144382262251071