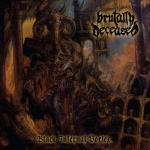 I’ve been infested by BRUTALLY DECEASED from the very day Jan from Lavadome Productions sent me their first album "Dead Lover’s Guide" back in 2010, their first full length which also was the Czech band’s first release, and what a release! It took me by surprise and I was soon dragged into their universe of old school Swedish Death Metal, heavily influenced, by among others GRAVE, doh, take a second look at the band name, and DISMEMBER. They do a cover version of ‘Override Of The Overture’ for fucks sake, and the rest of the mob from back then. Then Doomentia Records picked up the band and released the splendid split 12" between Swedes INTERMENT and BRUTALLY DECEASED "Glory Days, Festering Years", yet three tracks in the vein of good old Swedish Death Metal, as I can’t get enough of. Now around a year later, Doomentia Records has just thrown BRUTALLY DECEASED’s sophomore full length on the streets and yet again, no prisoners are to be taken. "Black Infernal Vortex" is a tad darker than the previous releases, and it is more driven by atmosphere, than pure riffing and moshing, we are getting a great dose of gripping darkness that possesses the album from the beginning to the end, together with some more thought and worked through songwriting, a development to be expected, due to the talent the band already showed on the first two releases. We are also getting a good deal of blazing guitar leads, and that together with the rest of the band and music, accounts for the full package of greatly delivered old school Death Metal, still born from Swedish influences, though with an expression of their own now! Dig into the dirt for more decay: www.facebook.com/pages/brutally-deceased/144382262251071, www.doomentia.com