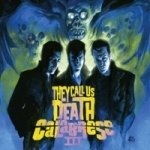 Phoenix, Arizona based three piece CALABRESE were total strangers to me until I stumbled upon their myspace profile not too long ago. Their whole presentation immediately caught my attention, so I checked out some of the sound files they had on offer there… and was hooked right away! Ok, if you’re a narrow minded Death or Black Metal maniac, you probably won’t be able to understand my enthusiasm here, but all those of you who spice up their musical menue with something out of ordinary every once in a while definitely should pay attention! "They Call Us Death" is already the band’s third full length that already helped me several times to get into a good mood. And by this I don’t mean that CALABRESE are playing some sort of happy music. It’s actually a very high energy, mostly pretty speedy Punkrock type of style, with catchy melodylines and the wellknown whoo-hoo-hoo’s in the typical MISFITS / SAMHAIN tradition (the vocals are kinda close to a young Glenn Danzig). Riffing wise CALABRESE definitely also have some Metal running through their blood and this whole combination makes them so entertaining. The lead vocals mainly got handled by guitar player Bobby Calabrese, but there’s additional, a bit more aggressive sounding, lead vocals (courtesy of bass player Jimmy Calabrese) in ‘Blood Of The Wolf’ , ‘Violet Hellfire’ and ‘Loveless God’ (hope I got them right here)… The band labels themselves as "the world’s greatest Horror Rock band", which is indeed a very self-confindent statement, but obviously not that far from the truth… According to their info sheet they already had over one million (!!) views on YouTube for their ‘Voices Of The Dead’ video (a track that appeared on their "The Traveling Vampire Show" album from 2007) and their music already appeared in no less than nine indie Horror movies. The also very Horror movie like coverartwork for the new album was created by comic book artist Eric Powell (he created "The Goon" for Dark Horse Comics). So, as you can see, all in all there’s not much to complain about, except for the fact maybe that the drums (especially the bass drums) sound a bit strange to me. And the album’s total playing time (as mentioned above) is a bit misleading as well, because the final track (‘Loveless God’) is by no means of the approximately 14 minutes length that the CD player wants to make us believe. It’s also got the regular length of 3 1/2 minutes, but there’s a lot of silence in between its actual ending and a "hidden" advertising message of the band at the end of the CD. Oh well… Apart from that: a highly recommended album, by a very very promising band! More info and ordering information at www.calabreserock.com. Sound samples at their myspace site www.myspace.com/calabrese