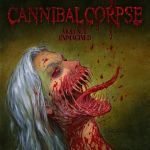 Is it just me, or do CANNIBAL CORPSE albums keep getting better and better? This simply isn’t normal after over three decades and 15 albums of music. With most bands, fans tend to make comments like “New album? Mehhh. I like their old stuff better.” But with CANNIBAL CORPSE, it’s quite the opposite (I totally agree – Frank). To have this much energy, this much brutality this far into their career, it’s practically unthinkable. And this, my friend, is why CANNIBAL CORPSE has fucking lasted this long above the rest. George Fisher (vocals), Rob Barrett (guitars), Eric Rutan (guitars), Alex Webster (bass) and Paul Mazerkiewicz (drums) are monsters of Death Metal and have proven it with their new album. “Violence Unimagined” opens up with ‘Murderous Rampage’, a blitzkrieg of Grind that rapidly crushes and mutilates, letting us know they aren’t slowing down with age. This fucking rips. ‘Necrogenic Resurrection’ doesn’t disappoint either as the guitars buzz and screech and the vocals growl and coagulate. The third track ‘Inhuman Harvest’ slams and elbows its way through the miasma in ways only CANNIBAL CORPSE know how. If you’ve seen them live, you’ll be reminded of the intensity of their shows throughout the album. ‘Condemnation Contagion’, ‘Surround, Kill, Devour’ and ‘Ritual Annihilation’ are all bloody Death Metal masterpieces. I honestly don’t remember the band having this much chaos in earlier albums no matter how brutal they were. And goddamn, the beginning of ‘Follow The Blood’ is like a nervous wreck of an animal that’s setting its sights on its prey. ‘Bound And Burned’ and ‘Slowly Sawn’ are Goregrind at their finest. Thirty years later and the boys still know how to disgust us. ‘Overtorture’ is a machinegun of a track as ‘Cerements Of The Flayed’ ends this towering brute of an album with no let-up whatsoever. The riffs are a little familiar, but who fucking cares at this point. I’m just trying to pick my roadkill ass up from the pavement after being run over by the 18-wheeled CANNIBAL CORPSE. Look, we all know what to expect from these guys. But what’s so damn difficult to understand is how they continue to bludgeon us album after album without a dud in the bunch. For more info, check out www.facebook.com/cannibalcorpse, www.metalblade.com