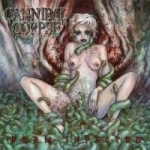 US-Deathers CANNIBAL CORPSE seem to have been a bit over-creative in the last couple of months, because their latest album "Gore Obsessed" was released just this year and now they come up with a new six song MCD, that features three tracks recorded at the same time as "Gore Obsessed". The other three songs are from various studio sessions in the last 6 years. The new tracks consist of the fast and brutal ‘Systematic Elimination’, the absolutely fantastic title-track, which starts off with a slow and heavy single-note riff, that have become quite rare in newer CANNIBAL CORPSE tracks and the METALLICA cover ‘No Remorse’, that was featured on the limited edition of "Gore Obsessed". Then there are two other cover versions, namely ACCEPT’s ‘Demon’s Night’ and POSSESSED’s ‘Confessions’, both turned out great and especially the latter shows the huge potential of George Fisher’s voice, maybe CANNIBAL CORPSE should think about a Death / Thrash Metal record, they definitely have the right vocalist for that!!! Last but not least there is a very rare ’96 version of ‘The Undead Will Feast’, a track from CANNIBAL CORPSE’s debut, which features Corpsegrinder on vocals and definitely kills. The only track I miss on this MCD is the SACRIFICE cover ‘Sacrifice’, that appeared on the German version of "Live Cannibalism" and the Japanese edition of "Gallery Of Suicide", but nobody’s perfect. Except for this small mistake, there’s nothing I can criticize about this release, the cover artwork shows a naked woman sitting in a sea of maggots and worms before an oversized vagina – looks really ugly! No CANNIBAL CORPSE fan out there should miss the chance to buy "Worm Infested", it’s a great example of how a good and valuable MCD should look like!!! For more information check out: www.cannibalcorpse.net or www.metalblade.com