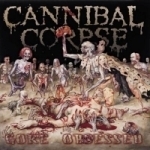 Ahhh yes CANNIBAL CORPSE is back finally with another release. First I must say this: Along the way CANNIBAL CORPSE has lost something, and I think its due to the critics. Ask any band that is the most popular in their respective genre and they’ll tell you that some critics go out of their way to find imperfections of their music. CANNIBAL CORPSE being at the top of the Death Metal heap aren’t spared. Along the way critics accused their music as just being talentless noise, no real structure or intelligence. And I think to an extent they took it to heart. If you compare Barnes era to the Corpsegrinder era, you’ll notice one thing is lacking now, groove. If you listen to their first 4 albums you will notice a tremendous amount of grooves, memorable riffs and tempos. Nowadays, the songs are very hard to play and are technical, which proves that they are excellent musicians, however, the groove has been sacrificed. Now onto this album, to the delight of the fans you will be happy to know that some of the groove is back. On songs like ‘Dormant Bodies Bursting’, ‘Compelled To Lacerate’ and ‘Drowning In Viscera’ that the groove of old is ever present. CANNIBAL CORPSE in 2002 stands as a testament of how well and original Death Metal can sound if you have the right amount of ridicuously talented musicians playing it. The production by Neil Kernon is much heavier than that of Richardson’s produced album which is what was also one thing that was missing, HEAVY guitar sound. All instruments are captured in all of the g(l)ory. Bottom line: CANNIBAL CORPSE 12 years into their career continue to prove that they are the finest craftsmen of their selected trade.