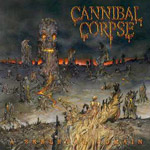 While some might yawn at the fact CANNIBAL CORPSE put out another opus, the consistent quality of their releases is exactly the cause why my anticipation and excitement for some new material is constantly very high and if you are equally inclined, you are in for a goddamn treat: marking the US Death Metal legend’s 13th studio album, "A Skeletal Domain" is another affirmation of the band’s leading status within the realm of sonic carnage and showcases improvements especially in the production department. Since "Bloodthirst" ‘CORPSE have not sounded as crisp and polished than on their newest record produced for the first time by Mark Lewis at Audiohammer Studios in Florida. While the band’s previous assault "Torture" was somewhat flawed due to a relatively weak drum sound, "A Skeletal Domain" blasts forth from your speakers with hammer smashing intensity, leaving a sea of scattered remains in its wake. In terms of (de)compositional work, the quintet takes no prisoners either bombarding you with a well balanced mix of wretched swarms of technical tunes courtesy of “frantic fretboard disemboweler” Pat O’Brien and straighter, thrash-laden numbers written by Rob Barrett who has proven an invaluable member of the group since ages. From the slayerized ‘Sadistic Embodiment’ or ‘Headlong Into Carnage’ over my personal fave, the catchy ‘Kill Or Become’ (with such sweet lines as "Fire up the chainsaw, hack their fucking heads off") onto the merciless title-track impressively building up from a pretty doomy riff into a ferocious blast inferno over more demanding songs such as ‘A Murderous Pact’ or the closing ‘Hollowed Bodies’, CANNIBAL CORPSE again sport a perfect mix between technique, impact and accessibility. Reasons for criticsm are rare, personally one or two of the faster tracks towards the end might have been sacrificed in favor to slower tracks in the vein of ‘Where Death Replaces Life’ (the best "ballad" they ever did, hehe), ‘Nothing Left To Mutilate’ or such "atmospheric" tracks like ‘Gallery…’ or ‘Centuries Of Torment’, songs adding a macabre diversion from the constantly high speed frenzy and resulting in moodier passages. Moments to breathe are certainly rare on "A Skeletal Domain", it’s a damn violent, non-stop furious album and due to its excellent sound makes it easier to indulge in all the musical details and avoiding the stiffness of “Evisceration Plague” for example. I miss a few more immediate "hits" but well, you can not write a ‘Devoured By Vermin’ every day. Any admirer of this persistent, experienced and to the very day absolutely fantastic band, should pick this up and celebrate the gory glory of CANNIBAL CORPSE! I just reserved my copy at the local Metal store, feel free to do the same. Listen to a track here. More info at: www.cannibalcorpse.net, www.facebook.com/cannibalcorpse, www.metalblade.com