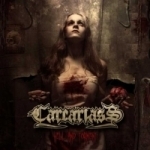 CARCARIASS (which comes from Carcharodon Carcharias – the Latin name of the Great White Shark, if some of you are eager to get some trivia type of information) is a 4-piece Death Metal band from France that has already recorded 4 full-length albums ever since the band was started back in 2001. The band seems to be kinda popular in their own home country France – and after hearing this 8-track promotional CD from them, I can understand it pretty well why that is so indeed. CARCARIASS have chosen to play that melodic and technical type of Death Metal that in fact, appeals to many people these days. In CARCARIASS’ case, the guitars have similar melodic attraction to them that have made IRON MAIDEN such a hugely popular act that they are nowadays, so I can also understand and associate with people’s comments about the goodness of this French Death Metal band. "Hell And Torment" is actually a compilation of the band’s first 2 albums, "Hell On Earth" and "Sideral Torment", added with some bonus demo + live material. The actual sales version contains 2 discs; 24 songs all in all, but the promotional disc that I received from the label, only contains 1/3 out of all these songs: just 8 songs. However, these 8 songs do give me a good enough idea about CARCARIASS’ capability to make people attracted to their stuff. This is undoubtedly well-crafted and idea-rich Death Metal, but there’s also some elements from Thrash and Heavy Metal involved with the basic sound of them, sort of allowing them to reach different types of people to dig their stuff. If the band’s vocalist Raphaël Couturier sang with clean vocals, they would sound either like a progressive Metal band, or just a modern Heavy Metal band. They are good at what they do indeed, without questioning it a bit – and with this 8-track sort of "sample" disc, I am quite certain I may start hunting down all of their other albums as well. Band’s official website: www.carcariass.com, label’s official website: www.greatdanerecs.com