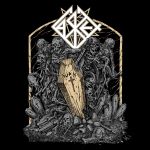 “Urn” is the latest album by the German death dealers CASKET. If you’re even faintly familiar with CASKET and what they’ve released in the past, you know even without listening to the new album that 1) this album’s rhythm will bring buildings down and 2) this is a band to experience live! CASKET has been around since 1990 putting out four demos and then came their first full length in 1998. “Urn” should be their fifth full length in three decades and well it proves the obvious. CASKET holds true the spirit of old school Death Metal, the riffs are razor sharp and swift in execution, there’s not a second wasted anywhere, the riffs pummel your skull, while the drumming is adding additional madness. The band sticks to their guns, excellent, immersive songwriting that doesn’t waver at all during the course of the album. Right from the first track ‘Bombing Graves’ the band is in top gear and is pretty much putting that chainsaw of rhythm at your throat. There are no heroics here, there aren’t any lightning quick feats on the fretboard. No unnecessary BPM drum wars! There’s literally nothing out of place here on the album. On the whole it is a vicious, venomous and a relentless attack with no end in sight. Well, the band has been around for three decades now and they know what they’re doing, so you know what to expect. If you’re a fan of any form of Death Metal “Urn” should be right up your alley. At a time when the newer bands are focussing on denseness and layers of atmosphere adding in to complex songwriting, CASKET return with a simple and a straight forward approach which they’ve employed since their inception. At just about 34 minutes long and CASKET adding in variety on every song, this is a release you need to get your hands on. Recommended, get a copy! For more information please visit: www.facebook.com/casketdeath, www.facebook.com/neckbreakerrecs