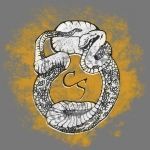 When I think of the Dutch Metal scene the first thing that comes to my mind is phenomenal Death Metal and Death / Doom. However, there is also an extremely creative and experimental side of the Dutch scene that is acknowledged but seldom discussed. Jumping right in, CELESTIAL SEASON are a seasoned Death / Doom band from Nijmegen, Gelderland. They’ve had a change in the sound during their career but that’s something for later. This compilation puts together the first demo “Promises” (1992) and their 1994 Promo. This is well written Death / Doom with a violin infused melody that shines from time to time. CELESTIAL SEASON neither are slow burners of the traditional Dutch heaviness which their contemporaries had already established by then. The sound on their first demo is pretty much a middle of the road affair. It meanders between average writing and fantastic parts. There are no modern riffs here and no experimentation. This is just a worship of the traditional in the rhythm section, which needless to say performs the bestowed duties perfectly. What stands out on their first demo “Promises” are the vocals and the violin parts. The band functions as a definitive unit of melodic Death / Doom which I really grew into. I’m familiar with their most popular release “Solar Lovers” and listening to this demo you realize the band has clearly strengthened their sound and added more depth to their approach. The second part of the CD is the Promo from 1994. This Promo follows their 1993 full length “Forever Scarlet Passion” by which the band had definitely decided on their pathway. Picking a track to be an absolute standout here is a hard job. ‘Above Azure Oceans’ is a true representation of the evolution of the band’s sound. It’s fuller, the sound is more melodious, richer and well composed. The moment we move onto the next track, the sound appeals even better. This is truly the sound that was the staple in the Dutch scene and even now is a delight when played live. This Promo is a good view into the band’s effort in solidifying their sound and surely needs more attention than before. This honestly could’ve been an EP, I mean, nothing wrong with the production, no gaps in expectations. The band is just marching on with their sound. “The Scent Of Eve”, the final track on this Promo is a brilliant sounding track that the band takes utmost care to present to us. This is quite well done. I understand this might not immediately grab your attention. However, a little patience with this compilation will surely help. For more info please visit www.facebook.com/celestialseason and www.vicrecords.com