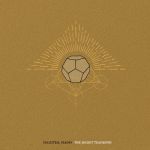 Some bands reform and make a comeback album which not only takes you by complete surprise, but also totally blows you away. And both, the former and latter, definitely apply when it comes to this comeback album from Dutch veterans CELESTIAL SEASON, who have gone back to their Doom / Death roots after veering off on a Stoner Rock musical path inbetween the mid 90s and early 00s, which saw them move towards a very KYUSS and Alternative Rock influenced sound. It is as if they bottled up their sound circa their last Doom / Death recording “Solar Lovers” and kept a lid on it for 25 years, then opened it in a studio earlier this year, it is the perfect and natural follow up to that album! Stefan’s vocals sound exactly like they did in the early to mid 90s! His impassioned low growls sounding just as strong and powerful as they did on that album. It is a very well crafted album with top notch songwriting, with memorable hooks jumping out at you from the speakers from start to finish. The riffing and guitar sound of Olaf Smit and Pim Van Zanen is classic CELESTIAL SEASON with some majestically morose stand out moments in the first song alone, which sets the bar for the rest of the album with each track slowly unravelling around melancholic riffs / melodies and monstrous atmospheric heaviness. The production is excellently done, very crisp and sharp, which has a modern clarity to it, whilst at the same time not sounding overly polished with a hefty low end booming heaviness to it. Jason Köhnen is a welcome return behind the kit, pounding away to the slow motion misery anchoring down the rhythm section alongside bassist Lucas Van Slegtenhorst, whose bass work will make speakers rumble. Another welcome return is the cello and violin provided by Jiska Ter Bals and Elianne Anemaat respectively, which really does evoke the band’s earlier musical work when such instruments were very prominent in their sound, both ladies and their respective instrumental contributions really adds to the lovelorn aural atmosphere, which definitely brings to mind classic MY DYING BRIDE as well as their own early recordings. It is very clear the band have collectively poured a lot of personal passion into this comeback album and it is sure to please fans of their early to mid 90s recordings. From the opening melancholic moments of the opening track ‘The Secret Teachings Of All Ages’ you are taken on a journey through a sublime and sombre sonic soundscape. There’s also an excellent TYPE O NEGATIVE cover, ‘Red Water’, which closes out the album. A morosely magical return to deathly and doomed form from CELESTIAL SEASON! Welcome back to the Dutch masters of misery! www.facebook.com/celestialseason, www.facebook.com/burningworldrecords