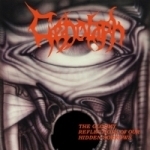 Basically, if you haven’t heard about the Mexican CENOTAPH so far, I’d doubt you are into Death Metal. These guys started back in 1989 and released 2 demos and 2 EPs before their debut album "The Gloomy Reflections Of Our Hidden Sorrows" in 1992. And this re-release by Chaos Records is more than welcome, since they have included both the "Tenebrous Apparitions" 7" from 1990 and "The Eternal Disgrace" 7" from 1991. Even though both EPs have a different style and sound than their debut album, both show the band’s roots and how they developed into the Occult Death Metal machine they finally turned into. The band started as heavy, almost sludge-like Death Metal with gurgling vocals and a somewhat messy production. But then, in 1992, they released one of the best albums that Mexico has spawned, ever. The mix of atmospheres is just incredible. Doom ridden parts blend perfectly with chaotic mid-paced sections all bound together by melancholic guitar melodies. All in all, the twisted riffing and the excellent drum and bass performances are the highlights here. The vocals are somewhere between a low growl and a harsh scream, sometimes even bordering on Black Metal. Production wise, the guitar tone is thin but perfectly understandable; the bass needs more low end; the drums tend to lack power and the vocals sometimes stand out too much in the mix. But it really doesn’t matter, because the combination of these elements results in a perfect sound for each and every song in this album. This is Occult Death Metal the way it was always meant to be. If you are into early 90s Death Metal and you were always looking for that band that could combine the melancholy of old TIAMAT with the pounding of INCANTATION and the twisted evil of DEATH YELL; well, look no further. I just can’t recommend "The Gloomy Reflections Of Our Hidden Sorrows" more than I already have. This one is just a classic Death Metal album. Nothing more, nothing less. All info on the band and this re-release can be found here: www.myspace.com/cenotaphmx, www.chaos-records.com