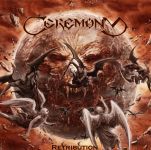 After a spooky horror like intro, the title track of the latest CEREMONY album plunges right into its speedy, technical and brutal Death Metal. We get tempo changes, riffs aplenty, drumming onslaught and beastlike vocalizations. This varied and strong album is all the more satisfying considering this is CEREMONY’s return after a long absence; this is no less than one of the early Dutch Death Metal bands, having been formed in 1989 and releasing a sole album in 1993 (besides a couple of demos and an EP). This present “Retribution” very much follows the energetic and savage Death Metal of the debut “Tyranny From Above”, albeit in a more polished way, with more playing proficiency and much better production, but with no less aggression in the least. Every song is complex and captivating, with a lot of musical layers each successive audition further reveals. This thickness is impressive, and often very musical, in spite of the sheer heaviness (listen, for instance, to the beginning of ‘In A Dark Time’). The often majestic compositions are very worth the listener’s repeated attention. The cover artwork is very good, depicting a battle between angels and demons (a theme that has been popular at least since IMMOLATION’s debut) and those bat-winged creatures also bring some continuity from the artwork of CEREMONY’s debut. It is a real pleasure to see an old exponent of the early Death Metal days return in such amazing form. If you enjoy your music brutal but well-played proceed to checking this out at www.facebook.com/ceremony-the-netherlands-772478876162300, www.vicrecords.com

More:
• CEREMONY - The Days Before The Death (Frank Stöver)
Back Report errors Print