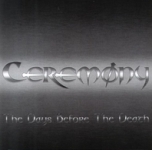 CEREMONY
The Days Before The Death
(Hammerheart Records)
14:05min

Even though I very much support the idea of letting fans of Steve Tucker (now fronting MORBID ANGEL) and Pat O’Brian (who replaced Rob Barrett on six strings in CANNIBAL CORPSE) hear the material that both of them recorded way back in 1992 (while they were still in CEREMONY), one problem unfortunately remains: the price of this mini CD. Due to the fact that there’s only three songs and a forty-four seconds short instrumental on this release, you not necessarily get value for money here. Apart from that, and considering that "The Days Before The Death" is "just" a re-release of the band’s one and only demo, the quality of this release is highly impressive! Musically CEREMONY delivered a somehow Thrash influenced form of Death Metal, that still knows to impress nowadays and partly reminds me on newer (but a little less technical) DEATH. Their incredible guitar work and great harmonies were the perfect counterpoint to Tucker’s deeply growled Death Metal vocals and will certainly raise a few eyebrows among those of you, who weren’t familiar with the band before. CEREMONY was quite obviously deeply rooted in the American Death Metal underground, but far away from being just another straight and primitive, low-tuned, dog-barking four-piece. Too bad they never made it any further as this showed a lot of potential already. All hail goes out to our good buddy Darragh O’ Leary, who’s idea made it all happen!