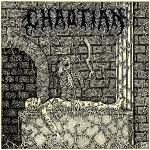 The three piece CHAOTIAN from Copenhagen in Denmark is active since 2017 and after two demos they finally release two new tracks in form of the digital single “Adipocere Feast”, which was also released on cassette via Extremely Rotten Productions. The first track ‘Etched Shadows’ goes back to the early 90s and unleashes a dirty Doom / Death bastard in the vein of IMMOLATION, AUTOPSY, enriched by a filthy note similar to ASPHYX or maybe PARADISE LOST during their first album. The beginning sounds like a slow version of CANNIBAL CORPSE before the mentioned doomy part appears and immediately it reminds me of the early works of the mentioned Doom / Death bands. ‘Adipocere Feast’ starts quicker with a Thrash Metal note before the old school tunes appear and again IMMOLATION and AUTOPSY come into my mind. I like the old school feeling the guys spread and also the songs and their structures are kept old school but definitely with a technical edge, which shows the skills of the involved musicians. Everything here fits and the single is a good appetizer for more to come. I definitely will also try to get the compilation of their demos and hopefully they will release their first full-length soon. Definitely a must check for the Voices readers and I could imagine that our boss and editor will like the material as well. Check these lunatics out via one of the following sources: www.facebook.com/chaotian-2067034590234328, https://extremelyrottenproductions.bandcamp.com