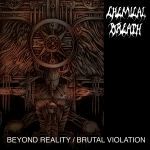 Here we have a pretty interesting re-issue of two obscure demo tapes from Belgium. Responsible for this CD collection is the Dutch label Vic Records, that brings the early works of CHEMICAL BREATH back to life. Well, if you’ve never heard about these Belgian guys, I’m not surprised, because, despite having released a killer full length album entitled "Fatal Exposure" in 1992, CHEMICAL BREATH have never had great success in the underground, except for their domestic scene. "Brutal Violation" was their first recording studio session, self-released in 1990 in cassette format. It contains five songs for almost 17 minutes of pretty raw Death / Thrash Metal. The sound quality of this tape is very raw and poor: nothing memorable. The second demo tape, called "Beyond Reality", was recorded in 1991 and self-released in 300 copies. This recording benefits from a better sound, although not exceptional in anyway. The total length is 16 minutes for five songs. Here we begin to perceive a prominent evolution of CHEMICAL BREATH’s style towards a more technical Death / Thrash sound. Musically, both studio sessions are reminiscent of the most important pioneers of Death / Thrash Metal, for example cult names such as early DEATH, FATAL, MALEVOLENT CREATION (1989-1991 era), ATHEIST’s "Beyond", SOLSTICE, as well as "Dysentery", "The Penance" and "Malleus Maleficarum" from PESTILENCE. In conclusion, this reissue is worth buying, only if you’re a real collector, otherwise try to get a copy of "Fatal Exposure" without hesitation, because this one is a real masterpiece. But in any case I would buy this re-issue CD, if only for the Giger-esque front cover: an awesome piece of biomechanical art! www.facebook.com/chemical-breath-733189026691916, www.vicrecords.com