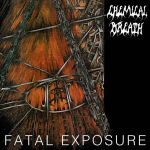 Once upon a time in Belgium, a bunch of young dudes had a lot of fun writing and recording a couple of demos and a couple of full length albums, before calling it quits. The band was CHEMICAL BREATH and they released the two albums "Fatal Exposure" and "Values" on the now defunct Crypta Records. Two albums that received quite good critics back then, though after "Values" not much was heard from the band. The band should be alive and kicking these days, even though it is a tad decimated compared to the good old days, as only one of the old members, guitarist René "Rocco" Rokx, is present, together with a new drummer, as I understand. Though that hasn’t stopped Vic Records from giving some new air to "Fatal Exposure", together with a compilation of the band’s quite good two demos "Brutal Violation" and "Beyond Reality". Two good re-releases Vic Records has come up with. CHEMCIAL BREATH excelled in a lethal mixture of MALEVEOLENT CREATION like Death / Thrash and more technical thrashy sheninagans, so a rancid mix of catchy and hooking Metal with killer twists and turns, the lads knew how to pen a tune. The album evolves quite organically throughout the 9 tracks, building atmospheres and consuming impulses from a thrashy and brutal beginning to a more progressive ending. A well timed blast from the past, from a band that most of us had forgotten about, a band with a legacy that deserves to be brought to the hungering Metal masses. Do check out this release together with the demo compilation if anything above did catch your eye. Enter the suspended animation: www.facebook.com/chemical-breath-733189026691916, www.vicrecords.com