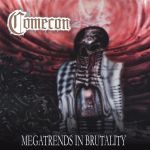 Once upon a time there was a band named OMNITRON, slated a big future, rumors about them signing to Warner and I don’t know what circled the Swedish Thrash Metal underground back then, though nothing really happended. As all this was spinning, two members of said band formed a new project to let off some steam. Those two were Rasmus Ekman and Pelle Ström, they set out to record Death Metal albums with different inspirations, using different vocalists from album to album. That project was COMECON, a band that released three albums, before calling it quits, as their label Century Media jumped from the deal of an opted fourth album. On those three albums the band utilized the skills of Lars-Göran Petrov, Martin Van Drunen and Mark Grewe. The deal with Century Media only happended as the band’s first label (the mythical Chicken Brain Records) went belly up, more or less, just before the release of “Megatrends In Brutality”. They sold the rights to the German label, which got hit a tad by the deal, as L-G Petrov, during the recordings of the album was out of ENTOMBED, though had re-entered the band, and was contractual bound to Earache Records, which demanded a good deal of buck, for Petrov doing his thing on “Megatrends In Brutality”. Musically we are dealing with a bastard of uptempo Thrash and grim Death Metal with just the right Boss HM2 buzz, great progressions, killer riffing and a lot of great guitar leads and melodies. The guys really knew how to craft a catchy yet brutal and grooving song. That topped with the killer vocals from Petrov, we aren’t many chords short of a masterpiece. Not even the quite well-programmed drumming can kill the vibe, the beats are quite fine and fitting, though the sound could use a twist or two to resemble the real organic pounding deal. The sound is courtesy of Tomas Skogsberg and Sunlight Studies, as it should be, for a Swedish gem from 1992. Juicy power and clear instrumentation and an organic pounding feel, let alone the drums, of course. Vic Records has now made this old classic available for us, the Metal hungry masses, so go give it a listen and headbang like a maniac to the Swedish Rock’n’Roll! More info at www.vicrecords.com