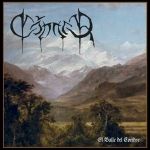 ‘Condor’ means vulture, the biggest one to reign in the Andean mountains. Two such condors also reign in the underground, one certainly is the Norwegian Thrash / Black act, part of the Kolbotn Thrashers union; another one is the Death / Doom force from Bogota, Colombia. CÓNDOR (with members of SIETE LAGUNAS) play a captivating and personable mix of Death Metal and classic Doom / Heavy Metal. Before being aware of this new release by them, I was first exposed to their second full length “Duin”, released in 2015 and was drawn by the fascinating album artwork. Then upon hearing the music encapsulated inside, my initial experience was an introduction to the culture of their native Colombia, like a horse ridden journey into the enticing Andes. Since then, I always followed CÓNDOR and all their releases with total excitement, that initiated with the debut LP “Nadia” (2013), and progressed with “Duin” (2015), “Sangreal” (2016) and latest “El Valle Del Cóndor”, released in November 2018. The latest LP “El Valle Del Condor” means ‘The Condor Valley’ – the title and the contents inside can be imagined by the cover artwork itself, which is an edit of the Frederic Edwin Church painting ‘Heart of the Andes’. Referencing such an expressive art by the legendary painter – who was the central figure in the Hudson River School of American landscape painters, marks CÓNDOR’s further attempt to developing their irresistible mark in Doom Metal with imagination, visions and ideal in perfect balance with their lyrical themes concerning philosophy, identity, nationalism. This album is inspirationally approached like a journey through key passages of Colombian history. And the music performed by Colombians on this album (nine tracks with the length of 36:28 minutes) has a valuable and rare quality which cannot be counted among one or two genres. The melodies and guitar parts here are wonderfully good as well as these pure-voiced recitations that seem to have come from the mid 90s. The growling vocals against the harmonious riffs add a layer of brutal contrast and rawness. The production is unpolished, earthy and organic, allowing the music to breathe warmly into its environment. It feels like it’s been unearthed from some forgotten and classic age. There are more fitting comparisons out in the wild but from my point of view, this album resembles THE CHASM’s first two records of the mid 90s, also heavily influenced by melodic Death / Doom of that time. Recorded, mixed and mastered by Luis Mesa at 27A Studios of Bogota, this full length is the third release of the young Colombian publisher La Caverna Records. Combining music, album art and the equally impressive logo (drawn by Colombian artist Helena La Rota López), with “El Valle Del Cóndor”, CÓNDOR magnificently delivered something where Doom, Death and Heavy Metal merged with a modern approach but with a retro execution. I’ve no doubts that this record will stand the test of time and CÓNDOR will surely keep reigning from the depth of the Andes. Explore more about the band at www.facebook.com/condorheavymetal and visit their label page at www.facebook.com/lacavernarecs.