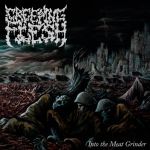 CREEPING FLESH
Into The Meat Grinder
(Growls From The Underground)
44:46min

CREEPING FLESH is a pretty young Death Metal band from Gothenburg. They’re active since 2013 and "Into The Meat Grinder" is their first full length album, self-produced after a bunch of EP and demo releases. Despite being Swedish, CREEPING FLESH don’t play the typical Death Metal that made their homeland famous in the Metal scene, neither the melodic vein nor the purest one. These guys sound more like a Swedish clone of ASPHYX, OBITUARY, early SIX FEET UNDER ("Haunted" era) and BOLT THROWER. The recipe is simple: war-inspired lyrics and some catchy riffs that are the setting for ten Death Metal tracks in which slow and mid tempos dominate. Anyway the result is pretty uninspired and repetitive, although the musicianship is good and the production is very professional (but a bit too polished for my ears). The martial concept pervades the whole album and is well developed in the lyrics with many historical references. In my opinion the accuracy of the war subject and the production are the strongest points of "Into The Meat Grinder". And the weakest? The repetitiveness of the song structure, some boring melodic parts and the vocals that sound a little monotonous. As I told before, this album was originally self produced by the band and then released by the Swedish label Growls From The Underground on CD format. Final verdict: if you’re into slow and military obsessed Death Metal, you’ll probably enjoy "Into The Meat Grinder". But if you love fast tempos, stay away from it! More info at: www.facebook.com/creepingflesh, www.facebook.com/growls666