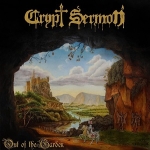 CRYPT SERMON
Out Of The Garden
(Dark Descent Records)
42:29min

Meet your Doom Metal with CRYPT SERMON from Philadelphia. This fairly new five piece consists of musicians who are or were around in various not that well known local extreme Metal bands like TRENCHROT or UNREST, to name just a few. In 2013, they joint forces to play out their fascination for Doom Metal. After a demo, released in the year of their foundation, they were signed to Dark Descent, having now the honour to release their first full length. And this album really packs a punch! The intro piece already offers an atmosphere that would fit some movie according to the bible, that is the main lyrical topic of CRYPT SERMON, by the way. Yet it only introduces the powerful epic doomer ‘Temple Doors’ that unveils the strengths of “Out In The Garden”: Powerful Doom riffs, based on a damn good rhythm section, spiced with the great vocals of Brooks Wilson that often made me think of Doom Metal’s vocal god Robert Lowe of SOLITUDE AETURNUS fame. And the grandeur won’t stop with ‘Heavy Riders’ and the pretty galloping groove of this song. But that’s just the attunement to the album’s first highlight ‘Byzantium’. This very epic and catching song has anything I love about Epic Doom Metal: the atmosphere, the gripping harmonies, the grand refrain… ‘The Will Of The Ancient Call’ has a hard time keeping up with this masterwork, yet this one still is a fine song in the vein of the already mentioned SOLITUDE AETURNUS, having to take a stand between two songs of grandeur. Yes, ‘Into The Holy Of Holies’ is another big one! This very diversified song impresses with very captivating choruses and a very ear- and heart-warming refrain. Talking about captivating melodies: ‘The Master’s Bouquet’ is another song that grips you from the inside. And in the (too early) end, the title track is a uniquely balanced song on the edge of powerful heaviness and epic finesse, telling the story of mankind’s expulsion from paradise in a very adequate song. So, this is a very fitting end to an album that gripped my heart of Doom once again. The SOLITUDE AETURNUS vibe makes “Out Of The Garden” a very worthy album that is so much more than a mere pastime, waiting for the overdue next album of John Perez & Co. I advise all Doom Metal freaks out there to put CRYPT SERMON on your shopping list. Check them out at: www.facebook.com/cryptsermon, and their label’s site: www.darkdescentrecords.com

CRYPT SERMON - The Ruins Of Fading Light - by Michael Kujawska