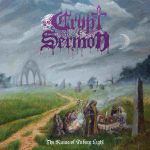 Four years after their debut, CRYPT SERMON from Philadelphia return with their second opus “The Ruins Of Fading Light”. The listener gets offered seven tracks of massive, epic Doom Metal which gets enriched by three interludes. To be honest, I have never been a fan of CANDLEMASS but these guys sound like a quicker version of the mentioned role model. As I don’t like clear and high vocals at all, I mostly tried to concentrate on the music but must admit that the vocals of Brooks Wilson are pretty fine even though not my cup of tea. I like the unpolished production of the album, so tracks like the uptempo opener ‘The Ninth Templar (Black Candle Flame)’ are working out pretty well. ‘Key Of Solomon’ slows down already and comes up with all known trademarks of the epic Doom Metal genre. What the guys are doing really well is concentrating on good remarkable refrains so the track is pretty memorable in the end. The third track ‘Our Reverend’s Grave’ is even slower and a lot thicker and the track’s name already reveals what to expect from it. ‘Epochal Vestiges’ is the first of the mentioned interludes and spreads a certain medieval feeling. ‘Christ Is Dead’ is following the interlude and convinces with good drumming, fine guitar work and pretty good vocals. The next interludes could have been skipped in my opinion but the remaining two tracks‚ ‘Beneath The Torchfire Glare’ and ‘The Ruins Of Fading Light’ are on a similar good level like the first tracks and pretty doomy. Fans of Epic Doom Metal should give these underground warriors a chance and check them out via one of the following sources: www.facebook.com/cryptsermon, www.darkdescentrecords.com

CRYPT SERMON - Out Of The Garden - by Thomas Meyer